The 2020 Newmark Award Lecture will be presented by

The Newmark Award was initiated to remember Dr. Philip Newmark, a faculty member in the Department of Biochemistry, who, at the age of 42, in the midst of an impressive career, was stricken with a fatal heart attack. Led by Byron Wenger, Paul Kitos, and Dwight Mulford, the Newmark Award was established to recognize outstanding research by a K.U. student and build the biochemistry program. Dr. Newmark received his bachelor's degree from City College of New York and his Ph.D. from the University of Colorado, working with Dr. Irving Goodman. He did two post-docs, one at Washington University with Barry Commoner, studying nucleic acids (1950-52) and a second at the University of California, Berkeley, with Dr. Wendell Stanley, studying plant RNA viruses (1952-54). He became an Assistant Professor of Biochemistry at the University of Kansas in 1954. Here, he began a productive research career investigating the physical and chemical characteristics of plant RNA viruses, especially TMV.
Dr. Marjorie Newmark, Philip's wife, came to K.U. as a Research Associate in 1954, working with Dr. Byron Wenger. She became a Lecturer in 1962, was promoted to Assistant Professor in 1964, and Associate Professor in 1974. During the early part of her career, Marge carried out research on arterial metabolism and atherogenesis, gradually shifting her emphasis to teaching in addition to the sole responsibility of raising their three children. Marge taught a variety of biochemistry courses including introductory biochemistry and a graduate level course in cell regulatory mechanisms. She is probably best remembered for the challenging introductory biochemistry lab course that she designed for our undergraduate and graduate biochemistry majors. She obtained NSF funding for equipment to set up this lab in 1971, teaching it almost every fall until her retirement in 1991. The course was initially well reviewed by the NSF panel, and continues to garner praise from the students who benefited from it. Marge was nominated for the prestigious H.O.P.E. Award. She can also take credit for building the biochemistry graduate program from a mere handful of students to a thriving program of over 40 students during her tenure as Director of Graduate Studies for the Department.

John C. Davis joined the University of Kansas faculty in 1976 after completing a doctorate at Pennsylvania State University and postdoctoral studies at Johns Hopkins. His training was in cell biology and endocrinology and his research interests focused on the behavior, morphogenesis, and hormone stimulation of rat testicular cells in vitro. John was a fine teacher, a creative and energetic researcher, and an inspiration to students and colleagues. In his third year at KU he was diagnosed with malignant melanoma and after a brave struggle over many months, he died in 1979 at the age of 33. His two doctoral students had completed much of their research, and their dissertations were written in association with John’s faculty colleagues. One of John’s students was Larry Erickson, an internationally known researcher with the Upjohn Pharmaceutical Company, who is studying the expression of blood-clotting factors in transgenic mice. Larry captured the spirit of John Davis in the “Acknowledgements” section of his dissertation, where he expressed his gratitude to his mentor and said: “His unquenchable enthusiasm for science and life will always be remembered.” John’s friends and colleagues established the John C. Davis Memorial Lecture Series in 1980 as a way to celebrate the fact that he made a difference in our lives. 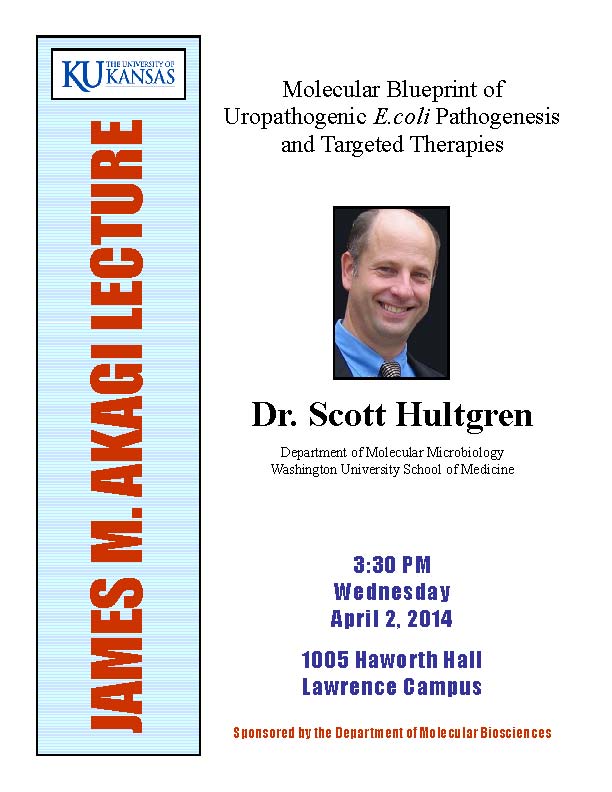 As a Japanese-American youth during World War II, Jim Akagi spent time living in a U.S. internment camp in Idaho. Following the war, he attended the University of Illinois where he earned a Bachelor of Science degree in Bacteriology. Jim then came to KU for his Master’s (1955) and PhD (1959) degrees, both in bacteriology, working with David Paretsky. Following his PhD, Jim performed post-doctoral research with Leon Campbell in Microbiology at Western Reserve University School of Medicine (now Case Western Reserve).
After his post-doctoral training, Jim returned to KU as an Assistant Professor in 1961. He remained on the faculty at KU until his retirement in 1995. He was quickly promoted, and attained the rank of full Professor in 1967.  In 1976 he became Chair of the Department of Microbiology. In his latter years with the department, he served as Acting Chair of Microbiology for a couple terms, at the request of the Dean.
Jim Akagi was a physiologist, biochemist, and enzymologist who studied bacterial enzyme catalytic mechanisms -particularly those enzymes involved in sulfate reduction and the catabolism of aliphatic and aromatic compounds. Much of his work centered on the bacterial genus Desulfovibrio - a Gram negative, sulfate-reducing bacterium whose odor was well known within the department. Jim published numerous papers in the area of bacterial physiology and was considered one of the international experts on the enzymatic reactions of sulfate reduction. He maintained continuous funding for his research throughout his distinguished career, in part due to his high level of research productivity and his important contributions to his research field.
Jim Akagi was a credit to the Department of Microbiology and the University of Kansas. He is a modest individual, despite his outstanding accomplishments, and has an excellent sense of humor. He now resides in the Seattle, Washington area. 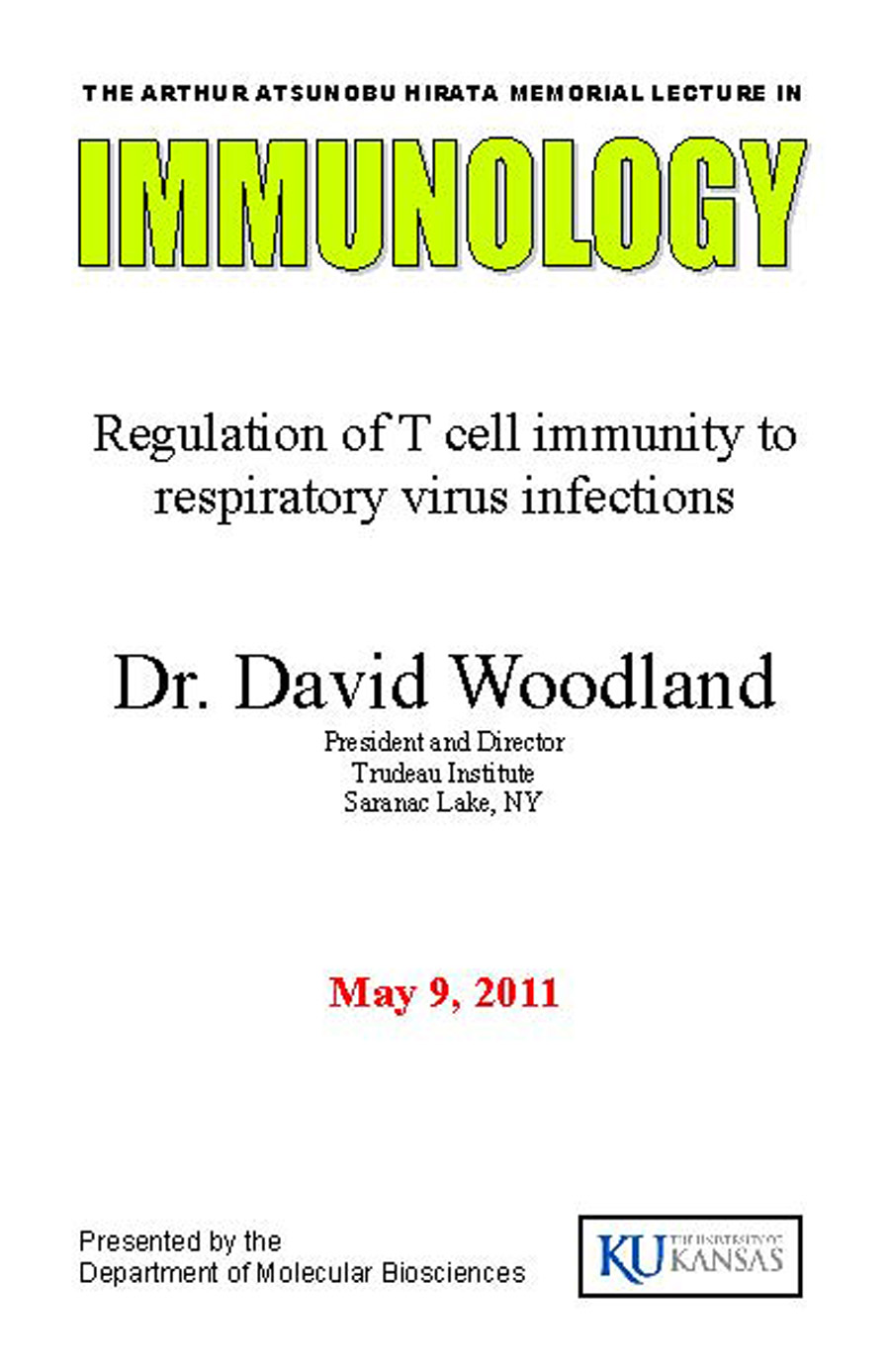 Dr. Hirata was born in Los Angeles, California.  He received his baccalaureate and master's degrees in zoology at Duke University.  Dr. Hirata first became interested in immunology during his graduate studies in zoology at the University of California at Los Angeles, where he earned a Ph.D. degree in 1958.  His interest matured at the California Institute of Technology where, under the tutelage of Professor Dan H. Campbell, an eminent immunochemist, he carried out postdoctoral research as a National Science Foundation Research Fellow.  In 1960 he moved to the National Institutes of Health in Maryland as a Staff Research Immunologist, and in 1965 he became a Research Fellow in Immunology at Abbott Laboratories in North Chicago, Illinois.  He joined the faculty of the University of Kansas as a Professor of Microbiology in 1973, but returned to Abbott Laboratories in 1975 to become a Senior Research Fellow and Head of the Laboratories of Immunology, a position he held until his death.
Dr. Hirata's life-long scientific interest was immunochemistry, especially as it applied to medical diagnostic technologies.  In this area alone he published many scholarly papers and received more than twenty patents.  He was an active member of more than a dozen professional societies.  His devotion to academic science was evident from his participation in the graduate teaching programs at Northwestern University and the University of Illinois Medical School.  Moreover, throughout his tenure at Abbott Laboratories he maintained a particularly close and active association with the faculty and students in the Department of Microbiology as an Adjunct Professor of Microbiology at the University of Kansas.  This endowed lectureship was established through contributions by Abbott Laboratories and the family, colleagues, and many friends of the late Dr. Arthur A. Hirata.

Why KU
Apply »
Home to 50+ departments, centers, and programs, the School of the Arts, and the School of Public Affairs and Administration
KU offers courses in 40 languages
No. 1 ranking in city management and urban policy —U.S. News and World Report
One of 34 U.S. public institutions in the prestigious Association of American Universities
44 nationally ranked graduate programs.
—U.S. News & World Report
Top 50 nationwide for size of library collection.
—ALA
5th nationwide for service to veterans —"Best for Vets: Colleges," Military Times
Quick Links

KU Today
RT @ResearchAtKU : Thanks to all of the @UnivOfKansas researchers who contributed to this effort! #RockChalk ❤️💙https://t.co/Yo7733fjAI
«»
Follow us on Twitter »